Tomorrow is wear blue for autism day.  One organization promoted it, but by wearing blue you aren’t necessarily supporting that organi 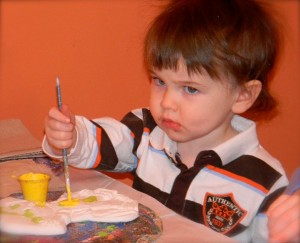 zation. You are supporting awareness for all the kids (and adults) that have been diagnosed with autism spectrum disorder in their lifetime.  Currently that number is listed as 1 in 68 and personally I don’t think the number of kids with ASD is increasing, I think it’s actually awareness that is increasing.  My older two kids to me now show signs that I’m sure we missed as they were kids…. I’m even pretty sure I have signs myself.  I’m even pretty sure that I’m much further on the spectrum myself than my older two kids.  The diagnosis wasn’t given or even thought of though many years ago.  Only children on the very low functioning part of the spectrum were diagnosed.

My youngest has always shown signs. He’s a smart, wonderful boy that is also very literal and very specific about everything he does.  Our life is fairly scripted with him.  In the picture we were at a painting birthday party for a friend (no longer friends).  They had noticed that my little one was very careful about his painting and didn’t get any on anything except where it was to go.  The painting place had offered a coverup, but my youngest refused to wear it.  The ‘friends’ were then calling him monk.  At the time it took me a while to figure out why they had been using that nickname – I originally was thinking it was because he was so quiet.  He didn’t speak really until after 3.  Instead they were referencing the tv show Monk with the defective detective.  – It’s a gift and a curse…

Ignorance about autism and even other disorders like this is pretty common.  To top it off parents of kids on the spectrum become alienated due to their kids not wanting to participate in activities in quite the same way – besides the fact that they are very blunt about everything.  Kids with ASD will tell it like it is!

The light it up blue campaign really brings awareness to autism awareness. Wearing blue and answering questions about ASD brings about more for change than the effect it will actually have on the organization itself.  I know I personally plan to wear blue, yet I can’t tell you what organization has suggested light it up blue.  Anyone asking me questions will get information about ASD, but knowing nothing about the organization involved, it will be forgotten.  I can share information about the great organization in the Kelly Autism Program on campus here.

Wearing blue for autism can be just to support austism awareness, it doesn’t have to be to support the specific organization that suggested it.  If you have any qualms about it, wear an autism t-shirt!  There are many other options, Autism Jacket, Autism Ribbon, or even just wear a pin with the autism ribbon on it.