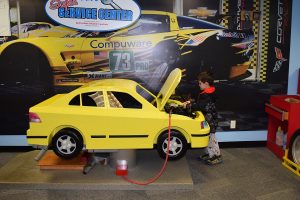 Living in Bowling Green, we’ve been to the National Corvette Museum a few times to visit.  They have a traveling exhibit every year that is a new subject, fun camps for the kids during days off from school, and family/friends  that visit like to see it.

Finding things that my youngest wants to do for the visit after having seen the Museum several times before is sometimes a challenge, so I was surprised when we had to gently pry him from the Kid’s Zone this trip.  He’s been several times before, but this time he was having a great time on the pit stop yellow car.  He changed a tire, replaced a license plate, watched me replace the muffler, and checked everything under the hood several times.

After he moved on to spell his name out on the magnet board a couple different ways, and then slowly check out each of the other cars in the zone.  By the time we had moved him on to the next area, our family was over half way through the museum.

This was our first trip through the new sinkhole exhibit.  I was a little surprised that my youngest ran all over the dome area where the sinkhole had been.  I had to think twice about walking on a floor I knew was on top of an area that had been filled in after destroying several cars.

They still have an opening to see down, with stairs down into the area – down 30 feet.  I didn’t watch all the videos to see how much of the area is still a gap. That’s our next trip.

The kids zone isn’t necessarily large enough to justify a season pass, unless you 1. Love looking at Corvettes and have little kids or 2. Have new Family visit every week.  The room is basically the size of a bedroom with a playhouse, play table, video, assembly line, and pit area.  If you have kids and are taking family though, it’s wonderful that the NCM has it available!