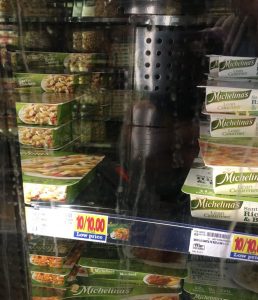 When you have a person that will only eat certain foods, it’s tough when they sell out. We have a tough time also when the company changes their packaging (that’s actually worse since the food is off the menu permanently)….  Some kids (and adults) with special needs have difficulty eating different foods. They have very sensitive tastes and are sensitive to texture. Asking them to eat something different is the equivalent to asking someone without their sensitivity to eat food that has been rolled around in the mud.

They look at the food and can’t handle the thought of how bad it will taste to them.  The thought that the food might great in their mouth like sandpaper in some cases.  Once in a while, in the right place, at the right time, they will work up to trying something…. but like getting you to eat something that you know was swooshed around in a toilet they will hold out forever if you try to just wait them out for dinner.  Looking at the offending food, what they actually see is the equivalent of food that has been swooshed in the toilet.

I’m frequently faced with people just saying, just make him eat.  It’s hard to explain to people why that’s not realistic.  In our house we have a few foods that are popular, but these Pop N Chicken are the most popular for dinner.  Someone else seems to really like them too and clears them out pretty frequently at our Kroger.  I buy even more when they are on sale and keep our freezer stocked with them.  My youngest knows how to cook them himself even!

The picture is from Kroger and I wasn’t the one that cleared the shelf. It was empty when I arrived.  We have three Kroger stores in town and I’ve had some desperate days where I’ve run a little too low and had to run to all three.  I’ve also had people make snide comments when there have only been three or four left and I’ve taken them, and they have been looking…. the grandfather who apparently was looking for the same thing made comments when I offered to let him have a couple from the coveted few that I had managed to find. Comments about how he grew up on a farm (yo, so did I) and if I starve my child he will be forced to eat anything offered. My word for that is child abuse.  Starving a child with special needs in the desire to force them to eat food that they have issues with…..

I’m amazed with how many people make comments that are insensitive and intrusive.  I also remember as a child my father refusing to take us out to eat because he felt that I was too difficult to manage.  We will never do that to our own children and personally I won’t let anyone make them feel bad about having a brain that is wired differently.  Our solution going out to eat usually just involves bringing a meal for our youngest.  I’ve even gotten washable containers that I can put his meal in and fill a compartment with ketchup.  Nothing like walking into a pizza place carrying McDonalds for your son, and always taking a meal from home to a Mexican restaurant.

My favorite containers have compartments and are washable.  We don’t eat out often, but when we do it’s a perfect solution.   BTW: my youngest calls these smiley fries, because the popn chicken comes with French fries in the shape of smileys.