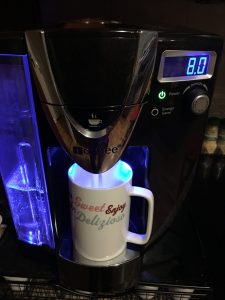 I love coffee makers.  I decided to try the icoffee after hearing about it from some friends!   It does use the Keurig K Cups, so that was a big plus.  I was excited to try a new maker that was rumored to have less bitter tasting coffee.

The first thing you notice is that the iCoffee has a pretty neon color glow. I loved that!  It didn’t have a clock, which was okay given that we have a bunch of clocks throughout our kitchen anyway…  So I was set up and ready to go!

Before making your coffee you need to turn a dial to choose what size cup you would like to fill. You can see on my picture I had chosen 8 ounces.  The selections went down to 4 ounce, but won’t fill a big carafe.  I think 12 ounce was the biggest I could fill in one go.  Each new friend that dropped by, I had to give instructions on making coffee.  Turn the dial to pick your coffee size and then press the unmarked center of dial.

Unlike my Keurig which seemed to always have hot water ready, the iCoffee took a while to make a cup each time.  My morning begins with walking in, picking a cup, sticking it under the maker, put in a Kcup and hit the button.  I’d love instant coffee.  Keurig pretty much provided quickly…. iCoffee didn’t have as quick of a gratification.  Later in the day puttering around the kitchen I can live with that, but seriously, first thing in the morning…  UGH… I want coffee.

To me they taste the same.  I’m probably not the best to rate taste though….  I do drink my coffee black, but I drink coffee because I love Mt Dew!  I’ve been trying to cut down on sugar and when comparing the calories between black coffee and soda, it’s an amazing difference.  Keurig also has options for Hot Chocolate (not as calorie conscious), chicken noodle soup, teas, and more!  For coffee though I tended to stick to the milder coffees normally.  I did find one that I love, but it’s a bolder flavor – Death Wish Coffee!  It’s now on my favorite list. The iCoffee claims a taste difference because of it’s spin brew technology.  Spinning the water through all the coffee so that the coffee beans are used evenly.  I’m not really sure how much that affects taste in reality.  I think so many other things with the beans make more difference, age, acid level, and more!

I love the look of the iCoffee and I love that I can choose the size of the cup… but the instant gratification I feel with the Keurig rates high on my list. Buying a new coffee maker now, I would go with a Keurig.  The K475 was what I previously had which also allowed for – K-CUP POD BREW SIZES: (4, 6, 8, 10, 12 oz.) and a Carafe (22, 26, or 30oz).  The only thing left that the iCoffee had on my Keurig was the cool neon look and I think I can live without that for a quick cup of coffee.