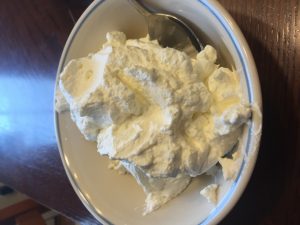 I decided to make my own whipped cream! It’s really easy to do and tastes great! I can control the ingredients too.

I used cream for mine and vanilla.  I have my kitchen aid mixer, but a blender or food processor would have worked also. To mix it up, I added my cream and put in little vanilla. I didn’t really measure but I would say it was about a tablespoon of vanilla.

I then mixed everything until the whipping cream was the right consistency.  If you would like the whipping cream sweeter – you could add sugar… I didn’t though.  I was planning to put my whipped cream on strawberries, so I was pretty excited just to have the vanilla flavoring added.  I did take a little of the extra left over and froze it. I’m going to see if it works out as a replacement for ice cream. I think maybe a little sugar would have worked well with the frozen cream?

It did work out well though!  I haven’t tried it with low fat cream yet, but that may be my next try.