On a trip to a conference we decided to take a small side trip to see the Vulcan statue. For us it was just a trip off the road to check it out from a distance, but it was fun to see anyway.  We were able to look up information about the statue before visiting!

While commuting to work, my favorite thing to do was books on tape, and one of my favorite book series took place in Birmingham Alabama.  The statue is mentioned many times, especially the fact that the Vulcan statue is only wearing an apron!   I had to see it myself after hearing the books on tape mentioning it so many times. The book series is the Southern Sisters Series by Anne George. I had to see the statue after listening to so many of the books on tape!

The statue itself was created for a world’s fair and transported back after.  The statue represents the history in the area and was created by an artist.    We could kind of seeing the statue from the interstate, but not enough to give a good idea of what the statue looked like.  Our drive was going to take a while and we had a friend with, so taking a long detour or staying an extra night wouldn’t work – so our best choice was taking a short detour.

We also were able to see a small copy of the statue at one of the children’s museums on our way down… kind of a Rube Goldberg device set up in a cage for the kids to see balls run through a system and make a hammer go down on the anvil of the statue.

The statue was created for the (Louisiana Purchase Exposition (1904 World’s Fair) in St Louis Missouri.  It’s the world’s largest iron=ore statue and one of the tallest also!  After going to the World’s Fair the statue was shipped back to Birmingham but due to unpaid freight, it was left unassembled by the tracks.  Over time it was put back together at the Alabama State Fairgrounds, but it was assembled incorrectly and it was missing it’s spear (lost forever to time).

Over time Vulcan became an advertising figure.  Vulcan held everything from ice cream, Coca-Cola, to Heinz pickles!  Finally it was moved to Red Mountain to become part of a park!  In 1946 the Junior Chamber of Commerce decided to make the statue into a symbol of road safety.  His spear was replaced by a neon torch that glowed green normally, but changed to red during the 24 hours following a fatal traffic accident. 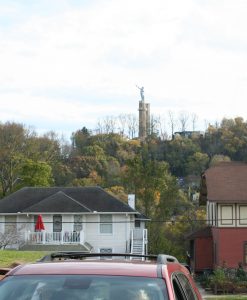 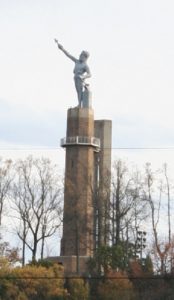 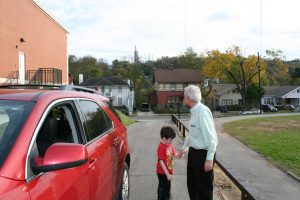 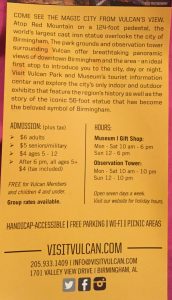