Mint Swirl Shake: What was in that? 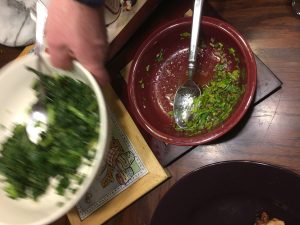 We’ve decided to give Blue Apron a rest and try something new.  This was one of our last meals with Blue Apron….  It included a meat also…. but the potato’s and green salsa type stuff came out well.  The steak that was with had a little bit too much fat on it…. we did eat it, but it wasn’t the best cut of meat.  All in all with Blue Apron we found that most of the meals used a lot of things like Vinegar.  Many used Kale or some green like it as the vegetable.  We never seemed to have an option for an Italian meal or a regular casserole, the most popular choices were Mexican or Asian. The meals were about $17 per meal with no other option and arrived in a box with ice on the chosen day.   Each meal’s ingredients showed up with whole ingredients that then need sliced, diced, minced or whatever.

This meal included potatoes to be diced up with a little oil and baked in the oven.  I’ve been using a mister to put the oil on the potatoes.  They come out a lot better pouring the oil over them.

We’ve decided though to move on and try another service next though.  We tried Blue Apron for about 8 months – that included the summer and stretching the meals over three people while my middle son was here.  After trying for so long though we have seen a pattern in the meals.

We are moving on to Terra’s Kitchen.  It will be arriving on Saturday.  The container in the picture looks completely different and the description says that the ingredients come pre-prepped, cutting down on a large part of the time needed to cook the meal. I’m also excited about the container that it shows is recycled by being picked back up for reuse.  I can’t wait to give it a try! 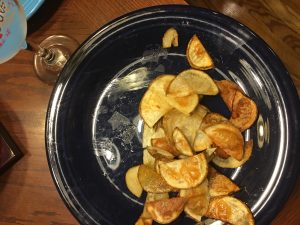 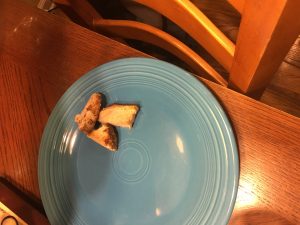