Did it again! Broke another crock pot…. I’m not even sure how it broke.  This one was stored under the sink in our utility room.  It went into storage just fine, in one piece! My middle son took it out for me to cook in and this is what he found.  The last crock pot was melted when my middle son pushed it to the back of the stove and cooked on the front burner – allowing the pan to touch the little plastic front during the entire time he was fixing macaroni and cheese. You could actually see the wires though the melted plastic!

This time the inside crock portion is shattered.  It’s broken in multiple spots.  So what are the suggestions for a replacement crock pot?  I’ve drooled over the ones that have wifi built in. You would too if you had ever come home and had to throw away dinner because you forgot to turn on the crock pot and dinner has sat un-refrigerated for 10 hours….

I do have an instapot which has a slow cooker setting on it, but does it really work as a crock pot?  We’ve used the Instapot to cook dinner quickly, it works great as a pressure cooker, but I haven’t ventured into trying it as a slow cooker.  Any advice? 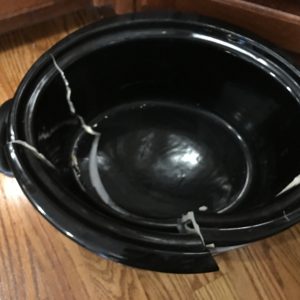