Now that most of the meals I fix are just for two….  I find it harder and harder to decide what to fix that we will love, and isn’t going to 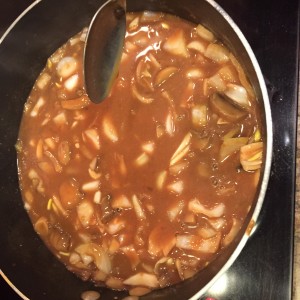 have leftovers for days.  My husband loves Beef Wellington – really his mothers, but I’ve made my own version that is similar to make and fairly quick.  It’s great for when friends are coming over and I’ve made it a few times when the kids are all home for a weekend….

To get a similar taste, but just for two, I decided to try making a steak – medium rare and then making a onion mushroom gravy to go on top.  I served it with crescent rolls, and we had a couple ears of corn to go with because the store had corn in and my husband loves corn.

For the gravy this time I used a beef gravy powder with water and heated it up until it was not lumpy any more.  I then added a can of chopped mushrooms, one chopped onion, and a spoon of minced garlic…. For this I could have used fresh ingredients, but I was going for fast, easy, and a first try.  After stirring them for a little bit and getting the onions softened, the gravy was ready!

For corn on the cob, I always just boil it.  Corn to me should just be boiled until it changed to the right color.  Growing up on a farm though, I’m a corn snob – so I’m never too happy with corn that isn’t fresh from the field in the first part of the season. 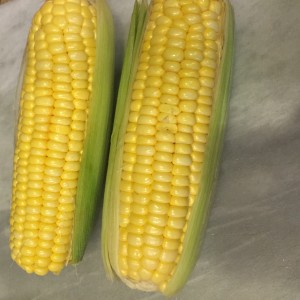 The ‘Fake Beef Wellington’ did come out good for a meal for two.  It was better for us than cooking a whole Beef Wellington for dinner and ending with leftovers that might now get eaten.  The amount of work wasn’t too bad either.  The gravy was so good I almost saved the extra!

Tonight a friend and I are going to try to make our own pasta. I foresee a white kitchen tonight…..