House for Sale, As Is?

To make my own pasta, I originally had a manual pasta roller.  I actually LOVED it! It rolled out a flat roll of pasta and after I would cut my noodles out.  In the past I’ve tried the dedicated pasta maker (it came with a video on how).  I could not figure it out… I tried and tried.  Video and all, I still couldn’t make it work.

For my birthday this year, my mother got me the Kitchen Aid mixer – and it has a pasta attachment available.  I took the plunge and bought the pasta roller and the pasta maker.  The pasta roller involves making dough and operates the same as my manual pasta maker with the major difference that the kitchen aid basically turns the crank!  Yeah!

The pasta maker portion then takes balls of the dough and extrudes it out through discs in the shape of the type of pasta you would like.  A friend came over to help and we tried Rotini noodles for pasta.  I’m pretty certain we need to search a youtube video with a how to, and add more flour to our mix, but the pasta did have the look it was meant to.  The issue we ended with was after making a little pasta, it all began to stick together. By the time we tried to cook it, we ended up with a clump that resembled dumplings.

The pasta though shown below, at first, looked great! So we definitely were on the right tra 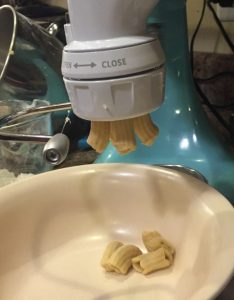 ck.  Our noodles also came out fairly well, but we weren’t aware of how long our noodles would be.  The drying rack (sold separately!) would have come in handy.  I also hadn’t purchased the attachment that cuts the wide sheet into the narrow noodles.  That attachment, though expensive, would have been handy.  We ended up with sheets of pasta draped over everything and a line of our children helping us try to get the pasta out of the rollers as it came out so that we could then find a place to lay it out to dry.

I think we were working on a skit for comedy central at the time (JK).  We also were surprised at how little pasta our recipe – which I thought would feed all of us several times over, actually made.  Two mixes of the recipe wasn’t enough for our families.  After finishing the two mixes and making up what we could, we ordered out Japanese for dinner and vowed to try again soon.