I decided to try steak pinwheels the other day!  This was something I noticed on TV – probably Good Morning America or Mr Foods, but it was in the background and I wasn’t paying immense attention…. just thinking oh that sounds good! So I thought I can try that.  Here’s my try: 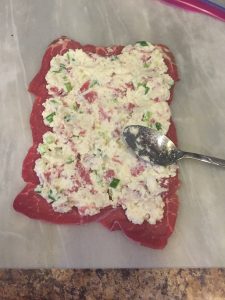 cut up, garlic and a anything else that I could find in my refrigerator that looked like it would go with.   This time there wasn’t a lot extra to mix in.  I think I also added some swiss baby bell cheese that had herb and garlic included.  And of course more GARLIC.  I smeared the mixture all over the rolled out steak I had gotten. I had a thin cut of steak, but I’d swear that the one on the show was a thicker butterfly steak – which maybe where my first mistake came in…..

After Rolling, I tried to cut the pinwheels, but my steak just mushed together…. Not the best plan! So I ended up cooking the whole rolled steak together. Putting the roll in a casserole pan in the over at about 350 until it looked done.

When taking the steak out of the over we tried to cut it again….  Hmmmm mush again. So we ended up eating torn meat mixed with the cheese mixture.  So for us it was a ‘fail’ as far as pinwheels, but it did taste all right.  I will definitely be worth another try with a thicker steak.