After my dad’s camera was stolen, we looked for some ways to protect everything down home at the farm.  We wanted something easy to install, easy to use, and that would keep a video record long enough to allow us to get the video downloaded if there was a problem. 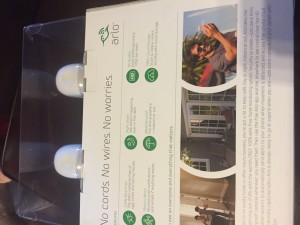 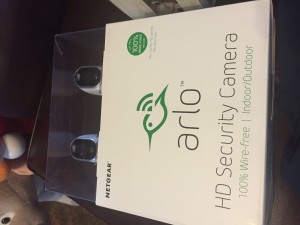 After looking around we found the Arlo Wireless Camera system.  The system we got came with a base station and cameras.  The cameras have mounts that attach with magnets making adjustment easy!  The hardest part really was putting in the screws to a log cabin (the logs were really hard wood) to hand the mounts.  We were able to download the app pretty quickly to go with.  The base station plugged into the router and had a sync button on the side.  Syncing did take a little effort, but it was mostly coordination.  The button on the side of the base unit had to be pressed until the correct light blinked, then a button on the top of the camera was pressed.  The camera would sync to the base unit then.  I had already created an account in the app and had the phone on the same network as the base station.

After syncing to the base station and having the camera mounts hung, I was able to put the cameras on the mounts.  They hang with magnets 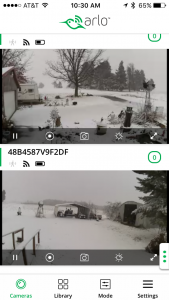 , so it’s pretty easy to adjust them.

Once they are hung, the app can be set up to send notifications every time motion is sensed.  They can be set up on a schedule or to always be on.  I have noticed that birds can set them off – and definitely cats and dogs.

Settings include how much time the video will record after motion is detected.  Originally the cameras were recording for 10 seconds and were going off every few seconds, but now they are set to record one minute per video.

When the notification goes off, you can go check the video immediately or wait.  The Arlo system allows additional cameras to be added later. Up to two weeks of videos are stored with the basic account.  They can also be downloaded and saved.

So far I’m pretty happy with it, but I’m waiting to see how the battery life goes.