Let’s make our own milkshake

Holiday Meal (including a Vegan)

For the holiday we had a wide mix of meal choices. – Our main course was ham and rolls, but we had lots of goodies to go with.  We have been having the leftovers for a few days now and are still doing alright with the variety!

Before Christmas Eve (where we always just snack at our neighbors holiday party) we chose to go out to Mellow Mushroom.  They have a wide variety of choices and everyone can get what they want.  The place was fairly empty, so we were able to eat and talk.  There were a couple snafus with our order, but all in all it was a good choice for a large group with our variety. 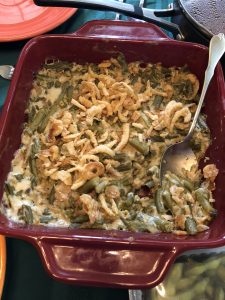 My middle son wanted green Bean Casserole, though I wanted corn pie.  This year I ended up making both!  For green bean casserole I mix a couple cans of green beans (drained), a can of cream of mushroom soup (Campbells),  French Fried Onions, a dash of soy sauce, some pepper and a cup of milk.  I tend to just guess at how much on many of the ingredients.  I bake the casserole for a while, usually around 350 degrees, and then pull it out when it looks about done.  I add a few French fried onion to the top also and bake it a few more minutes and I have green bean casserole!

My favorite is corn pie.  It does make a huge amount and I really need to figure out how to cut down the recipe some.   The corn pie includes 4 beaten eggs, 1/2 tsp salt, 2 Tbs cornstarch, 2 Tbs sugar, 2 Tbs melted butter, 2 cups milk, 3 cans of corn and a pie shell (unbaked).   I mix all the ingredients up except the pie shell and pour them into a pie pan.  Then I put the pie shell on top of the corn pie and poke a couple small holes in it….  I usually bake it at 350 for an hour – stick a knife in and make sure it’s done inside by making sure that the knife comes out clean.  I usually put mine on a cookie sheet – with sides…. this year I forgot the side and now I need to clean the bottom of my oven.

For my vegan son, I went with vegan meatballs in a onion and garlic spaghetti sauce.  Everyone ended up eating them, so this brand was definitely the one to get again!  They were easy to cook up and my husband and kids liked the taste.

Finally I fixed a mashed potatoes.  I use the premade and frozen potatoes, so it was fairly easy.  To keep them vegan I used vegan butter (from Earth Balance) and Cashew Milk.  My youngest, who is super picky, even ate these.  The vegan butter didn’t melt as easily as the dairy butter I usually use, so next time I don’t think I would use as much of the butter – or I’ll pre-melt it, but the little one had the potatoes for left overs for three meals.

All in all it was a meal that worked for our family and they were all items I can use and fix for meals throughout the year. 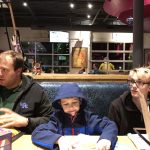 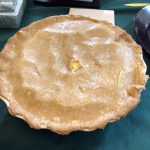 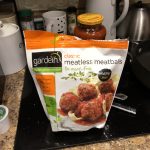 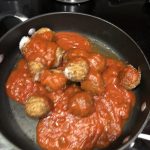 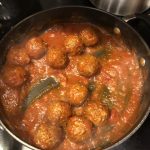 Vegan Meatballs all heated up! 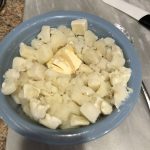 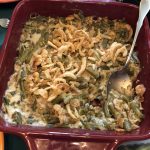 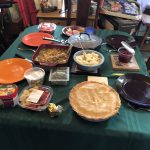